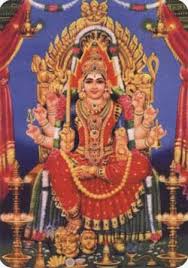 The people living in Coimbatore might have visited Thandu Mariamman temple in Uppilipalayam atleast once.  This place is very close to Nehru stadium and VOC Park, on the Avinashi Road.  Goddess Parvathi blesses us in the form of Thandu Mariamma. This temple is 500 years old and the business people surrounding this temple visit here daily, before starting their daily business.

The Goddess has saved many people from chicken-pox. It is said that when Thandu Mariamman appeared in the dream of a soldier under Tippu Sultan.  The goddess told her that she was living in the nearby forest. The soldier went in search for her and was thrilled to her locate her near the neem tree. He, then with the help of his friends constructed a temple.   Thandu or Dhandu means the place where soldiers erect their tent during war and other expeditions. As Mariamman was found in a Dhandu she came to be known as Thandu Mariamman or Dhandumariamman.

Brahmotsavam is celebrated annually for 13 days, from the first Tuesday of Chithrai month. The Navarathri Festival in Puratasi-Aippasi (September-October-November) is celebrated in this temple on a grand scale. The processions, with the image of the goddess in a huge chariot, are the main attraction of the Thandumariyaman Temple.

Please visit this temple and get the blessings of Arulmigu Thandu Mariamman.